If my race at Jedburgh Three Peaks Ultra was a shite run, it was to precede a shite week! Conversely there was an interlude to all this shite!

The Antonine Trail Half Marathon is one of my favourite races – its muddy, its hilly, has a fantastic race team and it takes place on my old stomping grounds near Cumbernauld. Although it must be said it doesn’t need my history to make it historic! The event gets it’s name from the Antonine Wall, a 2nd century Roman wall which runs through the area, with the race route literally scrabbling over fallen section more than once.

This year had some route amendments, taking the route down from the over-sized 13.8 miles half marathon to the traditional 13.1 half marathon. Gone were the big tarmac sections and the run through Kilsyth. Replaced with an extra hill and lashings of additional mud. It sounded great and I was to be disappointed. 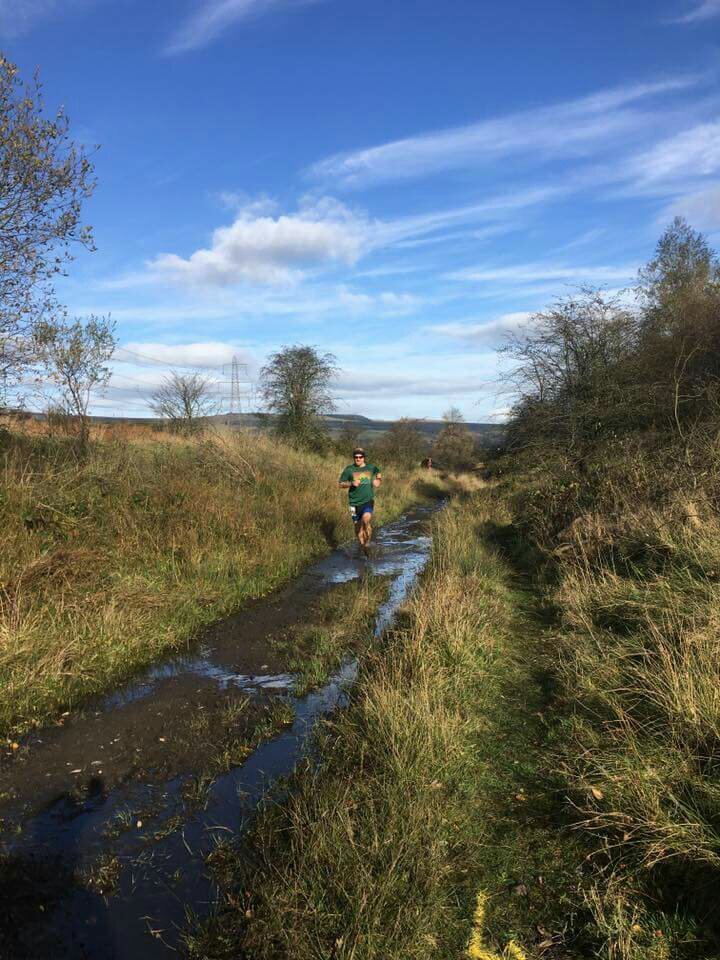 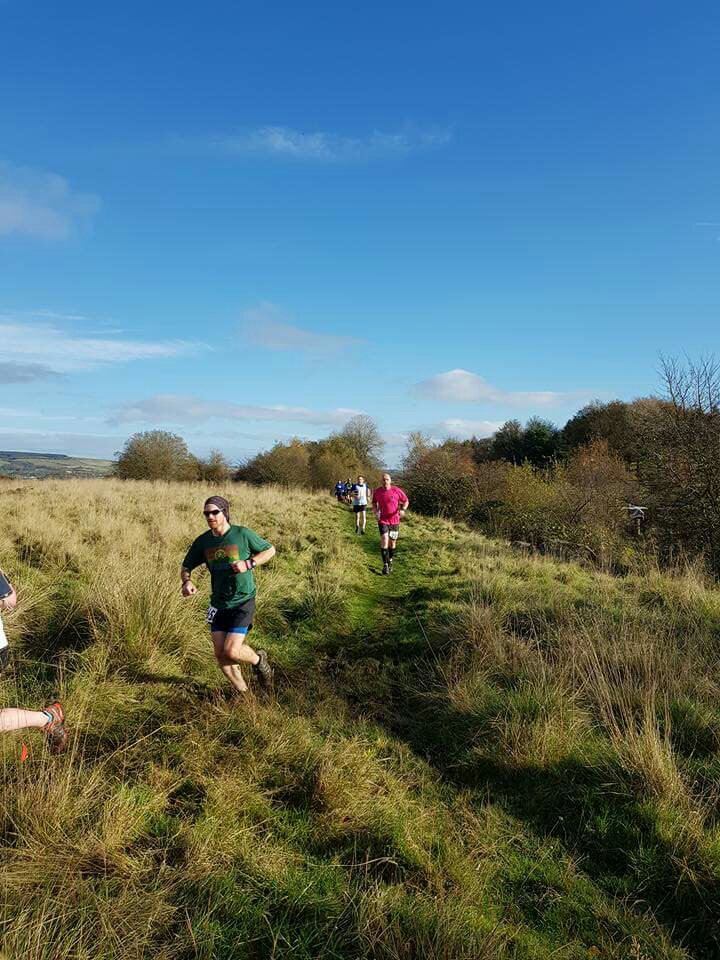 Being slightly mad I was taking part in this hilly mud-fest less than 24 hours after completing a 38 mile ultra, and subsequent beer session in the Scottish border town of Jedburgh.

Slightly less mad, but still not of sane mind my running partner in crime for the day, Garry, had also taken part in Jedburgh the previous day albeit ‘only’ 10 miles as part of the relay. And he’d had a tough one too.

Plan A was run with Garry, start slow, take it easy and enjoy. However I always have a Plan B!

The plan changed when within the first mile, on the outbound tarmac section, Garry and I got split up in the crowd. Crossing the railway bridge and into the mud, my feet discovered a mind of their own, and we were off. I bounded through the mud, whilst others tried to pussy foot round the edges. Passing marshals Heather and Simon Gold I was told to ‘take it easy’, but this seemed to be surprisingly so. The first hill ascent, and the first test of the ultra legs. Up I breezed passing a few walking, and nothing spurs me on like the need to then be sure I don’t look over cocky and need to walk just after overtaking! 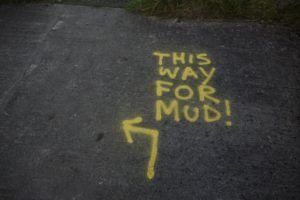 This is the new section, so all the more fun. A quick look back down the hill and definitely no sign of Garry, so I continue to push onwards, slotting in behind a couple guys on the narrow section and under the tree, confident I’d get them on the flat wide bit approaching. We reached I ran passed them, only to be quickly overtaken again! Ah well, flat and wide was not to be my strong sections today! Moving on we hit the steeper down hill section, and i was back in my element. I sailed passed a dozen folk here at a good rate of knots, round the corner and onto the canal, passing Stephen Schofield in the beer garden at the Boathouse, ‘Anybody would think you’d run an ultra yesterday’, he hollers in an encouraging fashion! 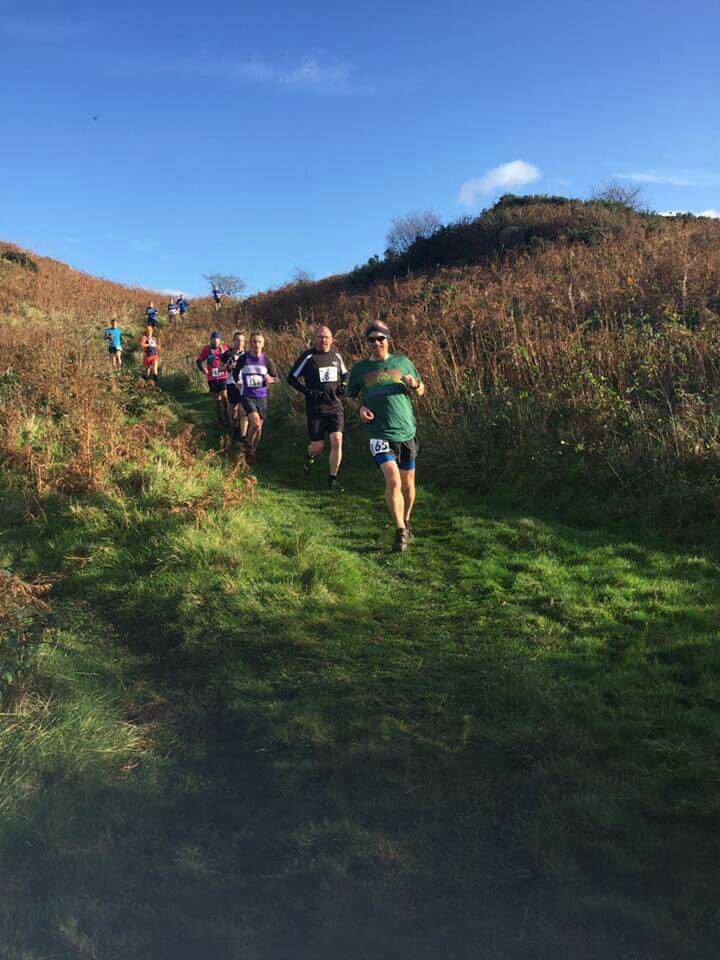 Another new section, saw us turn off back under the canal instead of heading down the Coach Road. I saw a couple guys here hurdling the canal gate just before the road crossing, and awaited a disaster to befall. It didnt! I wasn’t chancing that, and took the safe option, round and onto the brook side path. Another wide and flat section.

I’d met race director James Stewart down here the other week during one of the recce runs, and knew we’d soon be moving into a windy and narrow section of mud. Perfect, but i needed to make sure i wasn’t stuck in traffic, so I edged passed a few folk before getting into the mud. I took the long way round a couple of trees, through the undergrowth to avoid being stuck in single file traffic, thoroughly enjoying myself and wondering when my body and my legs would just say, “Enough” – it had to happen. But I intended to enjoy myself as long as I could.

On across the slippery decking, and a brief stop at the decorated water station before moving along the trail, with a view of the Bar Hill in front. Knowing we would soon be climbing this makes the view all the better.

A relaxing flat section along the canal was preceded by a welcome shout out from marshal extraordinaire, Ruth Howie. Every race needs a Ruth, she’s fabulous 🙂

Down under the canal through the tunnel, which was illuminated with a fantastic Halloween theme. Good work!

Along through Twechar, and time for the beautiful long drag up through the woodlands onto Bar Hill. It’s a tough but very rewarding climb – and I somehow managed my second fastest time on this Strava segment, despite it being my 47th mile of the weekend! 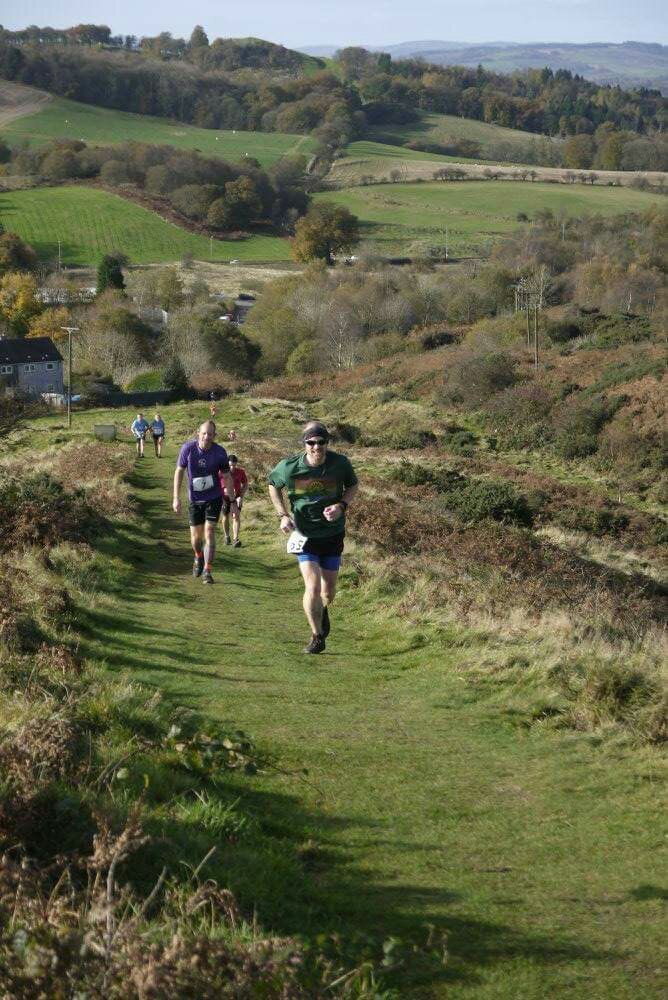 Legs burning, and lungs heaving the descent back towards Croy, and the start area for the Antonine 10k was very welcome, although I knew the was just a prelude to the final climb. Croy Hill awaited. I was again surprised myself (and other runners who were walking the ascent) by running up the hill, across the top and down the other side towards the noisiest marshals of the day! Dawn and Catherine…awesome support. 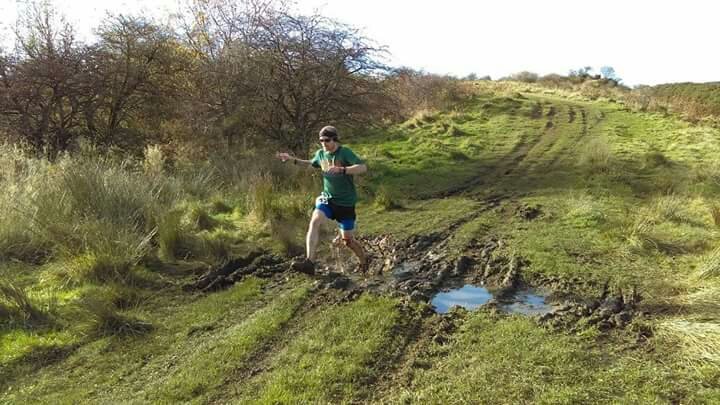 A glimpse of a fellow Westie up ahead spurred me on, and with more encouragement from Simon Gold ringing in my ears, I eased past my club-mate through the return leg of ‘the mud’.

Back onto the tarmac, and over the railway line and a mile to go to finish. The last short climb, saw me encouraged by seeing my next target, a Garscubite who’d passed me earlier, walking. Last splurge of energy and I ran passed him with a kilometre to go hoping he had nothing more left, as I didn’t. Desperate too hold on to the place I’d gained I kept pushing all the way into the line, and was over the moon to finish so strongly.

What an event! The new route is fantastic. Keep up the good work James and crew!

October saw a monthly challenge from Facebook group /website Running The Distance. Teams around the country compete in a friendly manner to complete the highest cumulative mileage. As per the similar event in July, I joined Arthur Duggan’s team, The Jobbie Dodgers

Some good running in October, with two ultra and the above trail half saw me topping the list for our team, narrowly in front of captain Duggan. Arthur popped out for a late night run to top our team! A bit of friendly rivalry, made me get off the train a stop early and grab a few extra kilometres. I was top again, with less than 30 minutes of the month remaining. 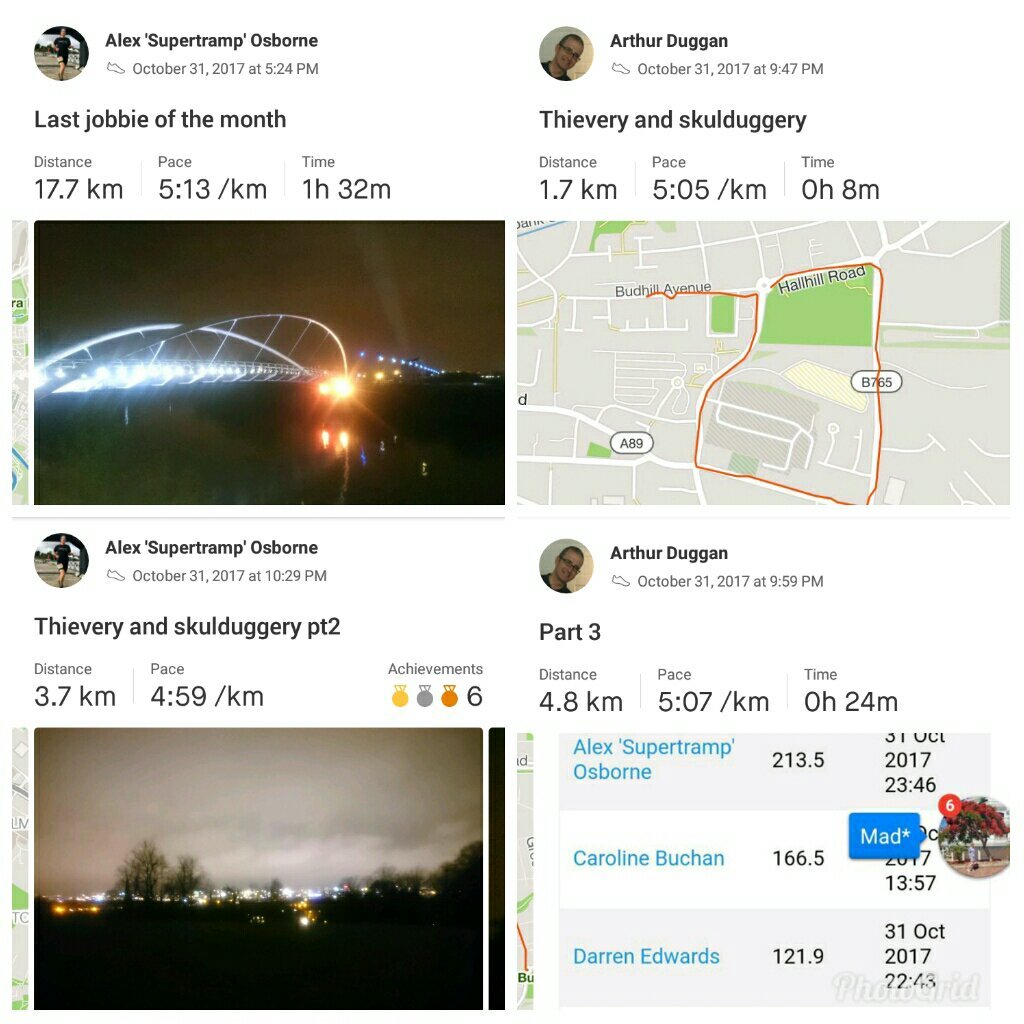 Waking early the next day, I had a sneaking feeling Arthur had run again! I checked Strava, and the sneaky devil had uploaded another run, and pipped me to head the team for October! 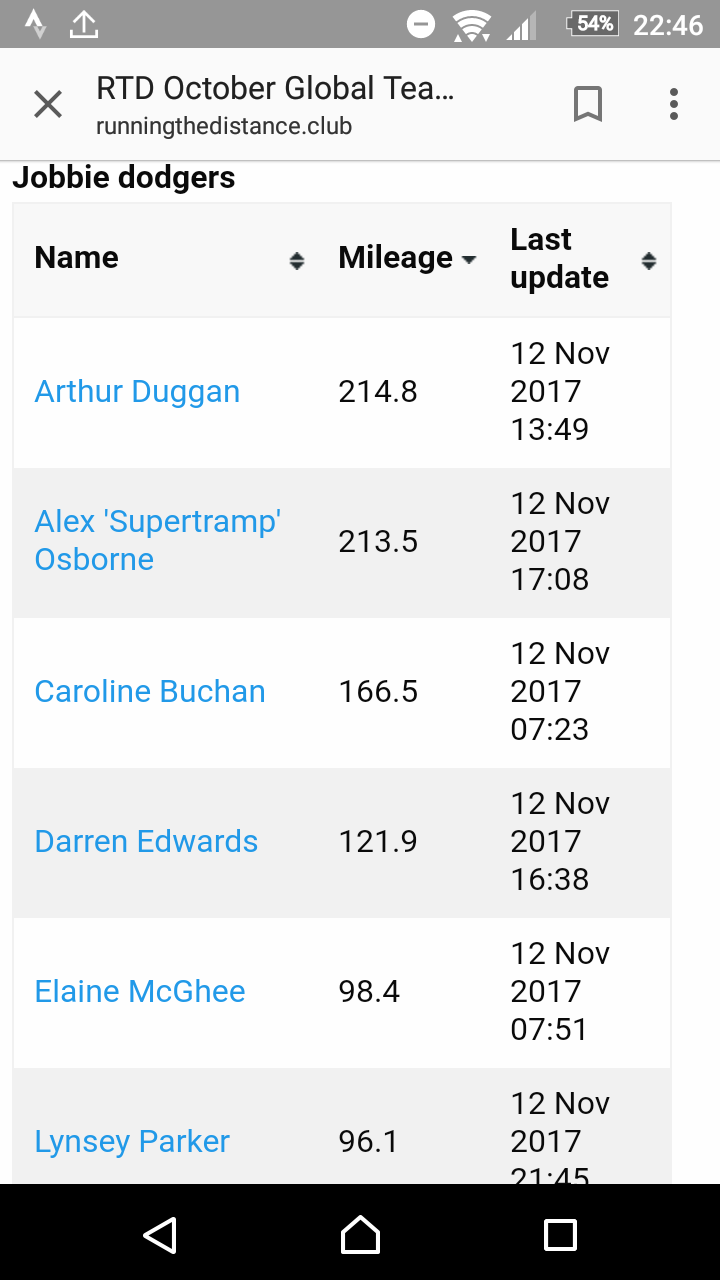 I’d pushed my body too hard it would seem. With cold sweats, and my insides turning to liquid, the RTD team name proved prophetic and I spent the next few days confined to quarters!