Another weekend, another country, another away day and another race – Semi Marathon du Bois de Vincennes; and another new blog. My first here on The Run Bible.

We’re still pre-launch as I write, and whilst a little momentum is gathering via social media channels, the decision had been made by Dan and I to launch somewhat quietly on 1st November, share with family and friends and slowly filter outwards.

This approach lets us iron out the creases that any new site is likely to have. However if you’re reading this, then you’re already here. So welcome!

Sat on a lofty perch with Air France, I’m off to Paris for a half marathon that caught my eye back in March whilst doing the Semi de París (The Paris Half Marathon with a capital T – highly recommended, and still by far my favourite – I’ve done about 20).

Looking west out the window, the wings rattling with a good bout of turbulence, I see the Isle of Arran peaking through the clouds, and remind myself that there is still plenty of good running left to be done locally without the need to jet around Europe!

I do enjoy a good European race though. A good excuse to see places I might not otherwise go to. This year so far has seen me race twice in Paris, once in Rome, and once in Gothenburg, not to mention some good runs in Milan and Geneva! It is often commented to me that I ‘get around‘!

Semi-Marathon du Bois de Vincennes takes place in the east end of Paris – very different to Glasgow’s east end! The route encompasses pretty much the whole Bois de Vincennes, a huge park area which is also the start and finish of The Paris HM, and on the route of the Paris Marathon so I’m vaguely familiar with the area. A quick look at the start list yesterday was a slight surprise – the race is bigger than I expected with in excess of 5000 runners signed up! My target here is a top 100 finish sub-85 mins. I’m running well just now, and with Jedburgh Three Peaks Ultra looming next weekend this is my last tester to see how the body reacts.

You know what they say about best laid plans….. Well not everything in Paris went to plan!

Arriving a day earlier than originally planned saw me shoot across the city to register, only luckily enough to bump into Sean and Anne, recent acquaintances from Victoria Park parkrun, who reminded me it was actually Friday. Not the Saturday I seemed to think it was!

Never one to look a gift horse in the mouth one of Paris’ two parkruns was selected for Saturday morning. Nearest to my airBNB, it was only 4km to Bois de Boulogne parkrun, which I’ve done before and really enjoyed as its mostly park trail. I’d finished 3rd previously so had high hopes.

4.9km and a diversion later, and I could see a crowd of folk disappear away down the path, with a quick shout to the Race director I set off catching the tail runner. An enjoyable run, clawing my way through the pack saw me finish 7th in a time of 20.30 (My Strava clocked at 19.50, which would have put me in 5th had I started on time!)

Cakes and cookies were on offer for finishing runners until this wee gorgeous fellow crossed the line at a gallop and tucked straight into his feast! He’d earned them I thought!

A great event. Seems a shame the French haven’t really 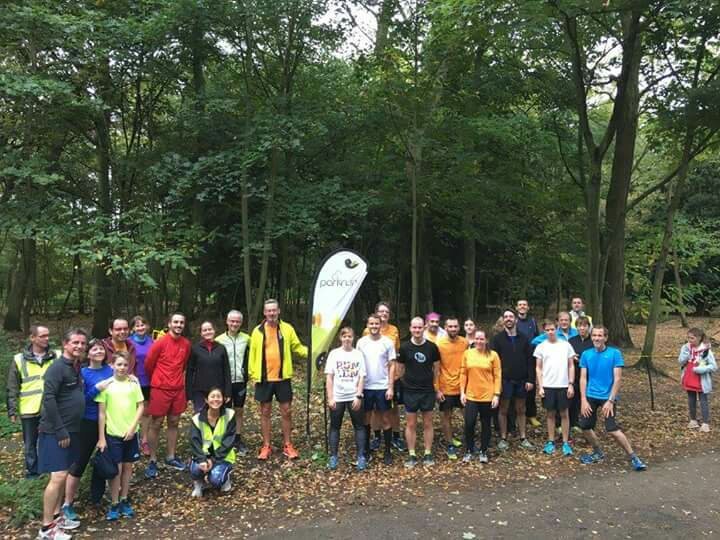 taken to parkrun. There was certainly a large number of locals out and about running just not in the event. An interesting thing they do at this event is list the results in alphabetical order instead of time – goes with the ethos of it not being a race. Surprised that’s not been rolled out. However, first finishers were Female- Stacey Bulger (Glenhuntly AC) in 19.05  and Male – Simon Metais in 17.48.

This is were my second mistake regarding registration began! parkrun over,  I decided to run across town to register. Always a bit bigger than you remember these cities! Twenty-four kilometres (no complaints, I was in France!) later and I arrived to register. A very slick and speedy operation, and now all was ready for race day. Off to the pub to prepare! Up early, coffee and pain aux chocolat ordered in my pidgin French and off to the start line in the shadow of the Chateux de Vincennes, an impressive 15th century castle.

A really nice course that wound back and forth around the park with some enjoyable undulations. Very narrow in places which made me thankful I’m quite a quick runner as I wouldn’t have enjoyed those bottlenecks in the big pack.

With Saturdays distance tugging at my legs I knew my sub-85 was never going to happen, but I pushed all the same and was thoroughly happy when i saw the clock as I crossed the line read 1.26.29 – I do wear a watch but I choose not to check whilst I run as I find it more a distraction. I do like to look at my route and data afterwards though.

A recovery walk and chocolate milk shake on way to the pub for the football, and the strange looks – I’m still wearing my medal and race number and most are oblivious to over 4500 runners having completed a half marathon in their city that morning.

An early flight back to Glasgow meant an early night at the airbnb, and some contemplation of my next away day. Who knows where I’ll go next. I’d certainly recommend this one though.