2019..Where to start?! The year that my life turned around and upside down. It has been epic on so many levels. Goodness knows what I was up to this time last year. Probably pottering about on the farm, chatting to the horses and avoiding the pesky cat gang (and stealing their food!) Life was ok, but it was nothing compared to the exciting adventure that it has since become!

My top highlight last year by far was finding my family. We are perfect for each other and I love them very much.. Even Cleody cat! She’s not like the others. She helps me steal cat food, even opens the packets for me. In return I share my food with her. We have a pretty good thing going on. She also comes in handy for opening doors and cupboards, yup, we make quite a team me and Cleody! She also loves playing fetch almost as much as I do. Some cat! 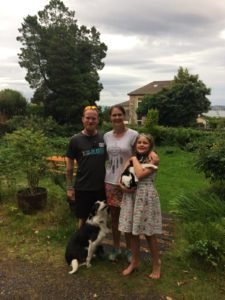 Looking back on last year I just cant believe the places I have seen and all the wonderful people that I have met. I used to think that the farm was the whole world. Having never really left it or met any other dogs, I sometimes wondered if I was one of the last of my kind. Perhaps the world had been taken over by cats! My eyes have truly been opened though. Since finding my family in April I have met so many awesome people and realised that the dog population is thriving in all corners of the country. I have smelt a heck load of bums, there is much to learn up there.

Becoming runner Jim has been one of the most amazing things to ever happen to me. The people, the places, the puddles, the mud, the forests, the hills, the views, the sand, the snow, the buzz – I could go on and on. I love it. I was born to do it and I can’t get enough.

It all started properly on the wonderful Glen Loin loop. I had been for a couple of shorter runs in the parks and done very well. So we decided we’d try a gentle paced Glen Loin. Me, mum and Kirsten (mum’s giggle/run partner) Its a 17km loop so a big step up but I was well up for it. Dad and his pals were headed for two loops. Yikes!! Those guys set off before us and all was going well. Then we caught up a bit and I got dad’s scent.. Daaaaaad!!! Off I went. I didn’t find dad though. I found his friend Garrrrrry taking a leak in the bushes!.. Muuuuuuuuuum!!!!

Stayed with the giggle party at the back after that. Those gals can chat, and they sure do laugh a lot. A joy to behold. The route was amazing and I was a natural. When I got tired mum perked me up with chicken. Nice. We completed the loop then headed to the Village Inn at Arrochar for one of my best snoozes to date. Yes. I was hooked. When I woke up dad and Robert had appeared after finishing their doubler, yikes! Back to sleep for me. 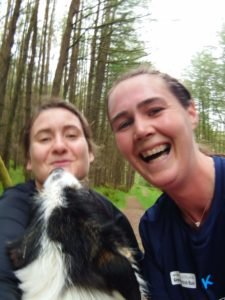 My longest run last year was 15 (Strava) miles, thats not including all my back and forths and sniffing missions! Bit of West Highland Way action from Rowardennan to Inversnaid and back with a tremendous bunch of people. Beautiful. 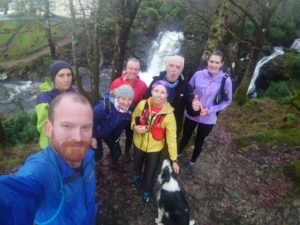 My highest run was on the stunning Island of Jura. We headed for the Paps on a mission to do all three, the weather said no and we only managed one. Still 713m of ascent though. 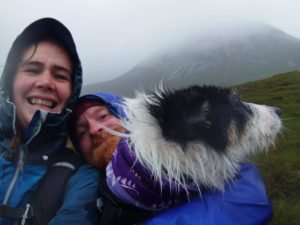 That brings me to my worst run of the year.. That bloomin Pap!! Heck in a handbag folks it was awful!! Now I take everything in my stride, I’m cool like that. I’m a dude. And the first part of the run was great. At one point I was up to my neck in mud, yes!! We were having a smashing time. I was a bit scared crossing the river (before my River Jim days) but dad carried me and we were back to bounding like a couple of gazelles up the biggest hill I’d ever seen. We waited for mum at frequent intervals. I wasn’t phased, I was having the best time.

Then the fog, rain and wind decided to join and blind us. Where did the path go? Who knows. We carried on. We hit some sort of boulder field. My paws kept getting lost in the gaps. We carried on. So did the boulder field. Crikey. We took shelter from the mental wind behind a rock. Dad went higher to see if he could find the path. We were cold and wet and I was done. Made myself a wee nest in the rocks and said no more thanks. Wake me up when we are home. 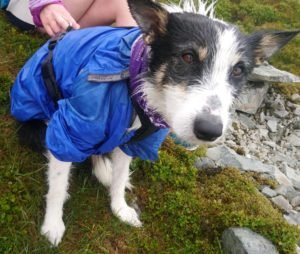 Dad found a path and persuaded me to give it a go. It was a steep descent. Mum was above us, she slipped and started careering towards us, gaining speed all the time. She crashed into us and took us down like a couple of skittles. We all flew down the hill in a pile of arms, legs and paws. We landed in the safety of a wee valley of soft grass with no wind and laughed a lot! Then we ate some cheese and headed down again. More boulders beckoned but there was grass between them so they were easier to negotiate. Mum slid down the whole Pap on her bum. Nearly took me and dad out a few times with loose boulders.

Sheesh. We made it down though. We did it. Such a releif to be on flat ground again. I bounded with glee the whole way back to the bash mobile. Thats one I wont be forgetting.. Ever.

My best and favourite is harder to choose. I am a very lucky dog and have had so many good times on the run.

After careful consideration, I think I’ll go for the first time my paws experienced sand. Soft beautiful sand. Aye karumba, this one will stick with me forever. Machir Bay on Islay. The run started over some fields which were full of sheep. Despite my ancestory I’m not massively bothered about sheep though. I was kept on the lead just in case. It was one of the first times I’d run on the harness. Me and dad bounding along together, man and beast in sync, mum bumbling along some miles behind! 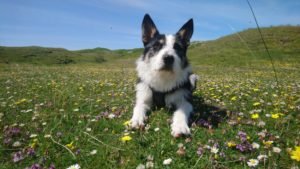 Eventually we got passed the field so I was allowed off the lead. We had gained some height, the views were stunning and the air smelt salty. Heading downwards towards the water, I was standing on a rock and I leapt down to the ground.. Whaaaaaaaaat was this? So soft, so fine, magnificent. I bounded about like an Andrex puppy in a toilet roll factory. If I could have id have done a backflip. High on life, I giddy hopped between mum and dad. Grinning like a mad man, sand all over my face from digging and sniffing. I couldn’t get enough of the stuff. I wasnt too keen on water at this point but I was so giddy I even dipped the odd paw in the sea as we ran along the beach together. It was just brilliant.

Hopefully we’ll go back there some day. I got a bit carried away with my digging antics after and lost a good tennis ball out there somewhere. Definitely worth another go!

Last year I ran 496km (on Strava). When dad noticed (10pm on Hogmanay) he nearly had me out for 4k, even though he’d already race directed and run most of a marathon that day! Luckily I reminded him to multiply by seven for dog miles. We were now on a cool 3472km. A dog’s life indeed!

As well as loving running, I have also spent a lot of time enjoying running events. I am marshal Jim, powering runners with pats and smiles. I don’t even mind when mum rings that gosh darn cow bell in my ear. Everyone knows how important it is to power the people through. 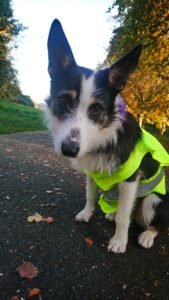 Amongst the biggest of my highlights of last year is Glenmore 24. Watching my friend John Aitch Roach smash his target was something else. I think he was running in circles for 24 hours (chasing his tail?!) He ran over 80 miles. Some of them dressed as a fish. It was fantastic to be part of. Our other runners Jenny and Patricia smashed it out of the park too. It was awesome. I also got to dress up as MD 2020! 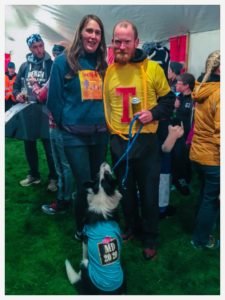 I’ve had the pleasure of being chief marshal at the recent TRBs events. The Migo Mile and Sx5, im all over it. I’m learning about all the work that goes into hosting a race (I sleep through the paperwork bits though) The route recces are where I come into my own. Round and round the parks. I love it. Seeing everyone enjoy something we’ve had a part in creating is very rewarding too. Im mega proud of my dad. He’s something else. Dan ain’t too bad either!

So in short, last year was incredible. I am completely giddy thinking about what this year will bring. I’ll be turning two years old in February. And I’ll be running lots and chasing balls and frizbees whenever I can. Updates on my antics will be here 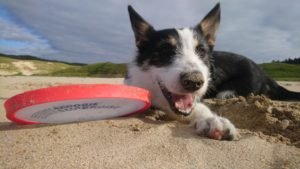