The inaugural event in Kings Park, Kx5; the first in the series, South By Five also known as Sx5.

The skies over the park threaetened rain. They were to come good with their threats, but fortunately for the most part just the volunteers packing down caught the brunt of the weather, with race partipants escaping the deluge.

A nervous race director jumped to the bench to give a short race brief, before sending the runners on their way.

A short lap cutting through the play park and past the big house, quickly bringing them back across the finish line. Up the incline and runners began the first of three big loops.

The big loop undualtes around the park, picking up the South Side Six route near the Menock Road entrance, heading down behind the big house and through the sensory garden.

The sweeping road section from the house.back to the start finish area allowed conpetitors a good burst of speed.

Tale of the tape…

It was this section that was decisive in the men’s race. Colin Whitby, (Irvine Athletic Club), had led from the off. Closely followed the entire race by Crispin Walsh, (Giffnock North AC). That final section was where Whitby put in a last kick finishing in 17.29. Walsh with nothing left in the tank having to settle for second place in 17.31

Making up the podium, having kept the front two honest, was Richard Cooper (Cambuslang Athletics) in 18.01

The women’s battle was equally enthralling, although entangled in the back markers being lapped it was harder to follow from the side lines.

Jenny Brown leading the line, and tailed by Laura Wallace (Ayr Seaforth). The final down hill section into the sensory garden saw Wallace make a move for the front. With a grimace of determination, she managed to hang on to take the tape in 20.29, with Brown following closely behind in 20.43.

Late series entrant Kirsty Mcleish, finished 3rd in 22.14, and was rightly pleased with her podium, keeping ahead of 4th place by just 7 seconds. 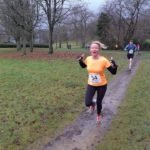 The cross country events the previous day, saw some runners not starting. A total of 53 crossed the line to record a time.

Well done to all. See you next time in Linn Park on 22nd December. 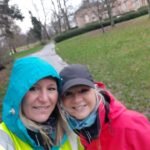