Linn Park was host to the second in the South By Five series. Race two promised to be muddy and wet. Given how soaked the course had been during the week, the puddles had receded somewhat, but plenty of mud remained.

Linn Park is Glasgow’s biggest public park (pedantic definition, Pollok is a Country Park!), and this proved a slight issue with some runners finding the start-line and registration. When you’re a regular in a park, it is hard to remember not everyone is as familiar as you are. Race start delayed slightly!

With a bleep, bleep, bleeeep from the ProTay timing equipment, the runners were off down the hill. A fast start down to the Ha’penny Bridge, before heading up to the newly cleared paths. Friends of Linn Park have done lots of work here recently restoring these paths to be much more accessible.

A quick canter through the Low Wood, before heading for a short road section towards the equestrian centre. A marshal was on hand here to direct runners galloping into the mud and ‘that hill’. A successful navigation of the Top Wood, led runners out to the top of the meadow, and a long downhill grassy slope. As we knew it was so enjoyable, we sent the runners round again!

Completion of the second lap, was followed by a compulsory puddle crossing, or water jump for some – before heading back over the bridge and a mean uphill finish! 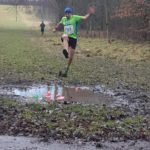 Tale of the tape…

Kieran Cooper, University of St. Andrews, home for Christmas stormed the line in 18.02, much to the disappointment of RD Alex – “if he tried harder I’m sure he could’ve gone sub18”.

In keeping with an old family tradition, Richard Cooper (Cambuslang) crossed the line in second place (19.56), “nearly 2 minutes” behind Kieran pointed out, son to father!

Crispin Walsh (Giffnock AC) sagged into a heap over the line in 20.06, having led Richard until second time up ‘that hill’. Walsh looked a broken man, but in consolation finished well in front Race 1 winner, Colin Whitby. Whitby may need to visit race sponsors Migo Sports and consider some trail shoes…… 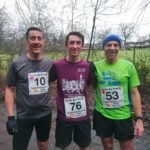 The ladies top three finished in an identical formation from King’s Park. This time Laura Wallace (Ayr Seaforth) led from the off, with Jenny Brown in hot pursuit. Wallace looked comfortable for the whole race and was perhaps happy to have taken it easy at the previous night’s Christmas party! Kirsty McLeish again completed the podium, delighted to be whisked straight into a photo despite crossing the line two seconds prior – “I thought I was going to vomit coming over the finish line”! 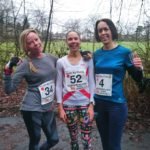 Christopher Steward (Bellahouston Harrier) chose the perfect way to celebrate his 70th birthday – a fantastic run in the park followed by cake and coffee! 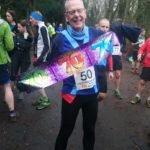 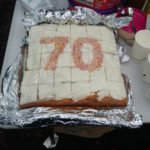 Thanks to Friends of Linn Park for their footpath work, marshalling and tea/coffee and refreshments at the finish line! Follow them on Facebook @Love Linn Park