ProTay Timing and Events brought some chip timed bibs and a fancy new timing mat to the event, to test some new equipment on the damp guinea-pigs, doubling up as runners!

From the off, Grant Murphy (Bellahouston Road Runners) set the pace. Chased by Osborne, who clearly thought he had to lead by example! The far turn point marshals only just reached their stations before Murphy was on them. With some additional shouted instructions shouted after the first-timer to ensure he stayed on the route. He continued to pull away taking the tape in 5.07 giving it his all right to the line. 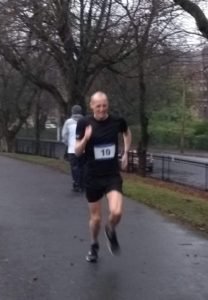 Breathing hard down Osborne’s neck was Cambuslang Harrier, Andrew Anderson. Enouraged by the marshals, he past the Westie at about 1km, and manged to remain in front and take the 2nd spot.

Jenny Brown lead the women from start to finish. Aiming for a sub-6 minute finish, she was distracted into thinking she’d gone off too fast by overtaking Mark King (Cambuslang Harriers). It was the wake up call King required, and he edged back past Brown to scoop fourth place. King commented after the race, “There just nothing there today. Then Jenny went past and the body seemed to wake up. Too little too late.”

There was some very soggy paperwork post race! The weather cleared nicely after the cleardown – typical! 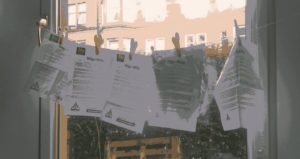 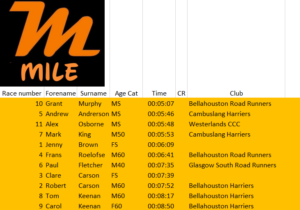 We hope to see you next month for more Migo Mile fun.

Next event is Sunday 23rd February at 9.30am

For details of other The RUN Bible events click here