Following the first race in July (read the review for that race here), we went again with the second (of three) race on Sat 20th August. For race 1 we had 22 people register and 20 of them turn-up (two DNSs), for race 2 this had increased to 30 entrants – unfortunately only 21 raced on the day for various reasons.

The 21 who did make it, took advantage of the milder (if still sunny) conditions – with it being scorchio at July’s race. There were some fantastic performances all round and our awesome tail-walker Nicola was left wondering if she’d upset everyone!

Everyone zoomed off and not much walking took place, the nearest person to Nicola finished 3-4 minutes before her! Every runner ran way under an 8 minute mile!

The battle for overall winner was epic. Race record holder, 17-year old Billy Reid of Preston Harriers and 4.49 mile fame, again kept us in suspense and entered on the day. Lining up alongside him were several 5-minute milers and sub-5 Karl Hodgson from Red Rose Runners. At just passed the half way mark Karl was ahead…just…. 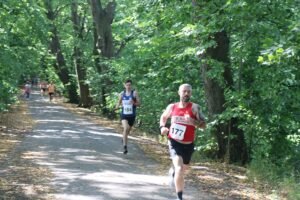 Young Billy put in a final push in the last couple of hundred metres and finished first in a new Old Tram Mile official race record of 4.42, just ahead of Karl in 4.45. The battle for third place was rather epic too – Steve Abbott (Wesham RR), Andrew Fairbairn (Blackpool, Wyre & Fylde RC) & Matt Holmes (Red Rose) all finished within a few seconds of each other in 5.01, 5.04 & 5.06. 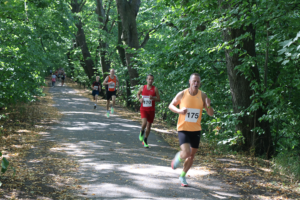 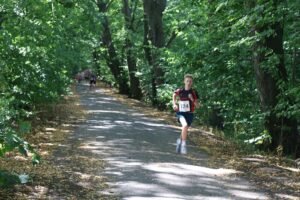 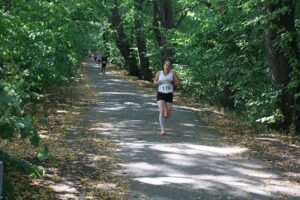 Race 2 first lady was Katey Markland of Preston Harriers who flew to a time of 5.58! Well done Katey! 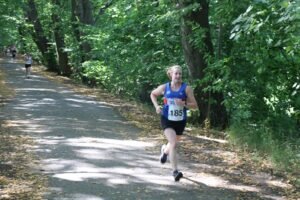 Red Rose Runners upped the ante in race 2 and pipped Preston Harriers to the male team prize. Which leaves the series at 1-1, who will triumph in the final race next month (Sat 17th Sept) and take the male team series prize?!…. 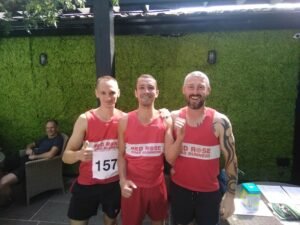 Unfortunately in race 1 & 2 we haven’t had three or more female runners, so the female team prizes have gone officially untouched. However word on the street is that Red Rose Runners, Preston Harriers and Blackburn Road Runners are all going to put a ladies team into race 3…. 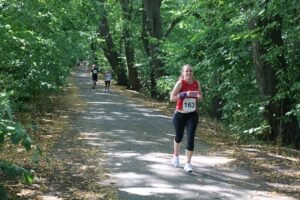 After processing the full results (which are further below, more on them in a minute..), we also gave spot prizes to Anna Barcroft (Blackburn RR) who was FIFTY SEVEN SECONDS ahead of her target time of 8.30 with a 7.33 and to Dan Hamilton (also of Blackburn RR) who takes the ‘Mr Consistency’ title. Somehow running 5.52 in both races 1 & 2 and the EXACT SAME TIME when doing the ‘Virtual or Solo’ version during Lockdown!

Picture below is them with Jeanette Baron (right) who smashed her 7.30 target with an impressive 7.21 (& bangs out 80%+ age grading runs for fun – sickeningly good). 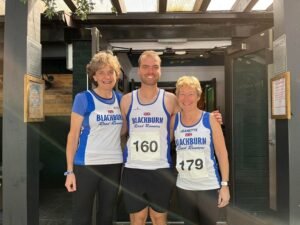 We’ve included comparisons against (a) people’s predicted times and (b) their Race 1 times (where applicable) – some seriously impressive performances!
We hope to see you at Race 3 and the series finale on Saturday 17th September – same place and time. Why not encourage some of you runner (or walker) friends to pop along and experience The Old Tram Mile series? Entry page link to forward on is here 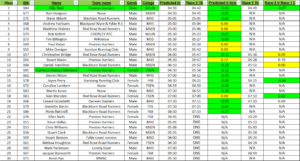