Perfect sunny, dry and cool (around 15c) conditions were provided for the runners of the final race of the series. Some of the front-runners waited with anticipation to see if certain speedsters (Billy, Katey etc.) would enter on the day once again. Whilst we had three join us as on-the-day-entries, neither Billy (winner of races 1 & 2) nor Katey (female winner race 2) could make it.

We had a best yet 39 runners register to take part, with 12 unable to start. This gave some of the others a chance, and wow did they take it!

Before the main race, we gave our marshals the chance to run the mile – 6 of them did so and ‘bust a gut’ down the OTM. Best of luck to Dan (Berlin & Chicago), Gary (Chicago) and Shirinn (Amsterdam) on their upcoming marathons! Huge well done to Anthony, Bill and Fiona – all of whom just keep getting fitter, stronger and faster! Huge thanks to all the marshals and race team – without you there’d have simply been no series, you made it happen. 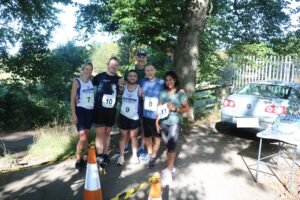 Race 3 overall winner was Matt Holmes in 4.57 (Red Rose RRs) – it took a mile-PB and epic sprint finish to do so – being a single second ahead of Andrew Fairbairn in 4.58 (Blackpool, Wyre & Fylde RC). Closely followed by Russ Price (5.06, Chorlton) and Joe Gleave (5.07, Blackburn RRs). Russ being able to let loose having originally planned to run with his child & buggy, with Joe over the moon after a sub 1.25 at GNR the previous weekend. 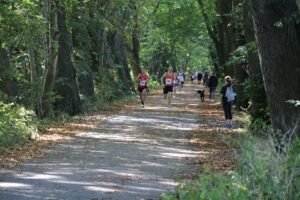 With regards to the male series winner – turned out to be a lovely surprise with the biggest cheer and grin going to Chris Bridge (Red Rose RRs) – with Billy Reid and a few others unable to make it, Chris swept to the series title with impressive sub-6 min (his target) times of 5.38, 5.47 & 5.37 – Well done Chris! 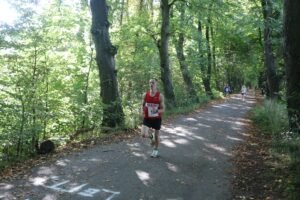 Jayne Perry (Garstang RC) again took first lady in a time of 6.17, beating her target time of 6.30. With that victory Jayne also took the overall female series title with times of 6.15, 6.21 & 6.17 with her daughter commenting ‘its all about the time for mum’ – well they’re amazing and very consistent times. Talking of consistency, the next lady in the series was Sian Marsden (Red Rose RRs) who recorded times of 7.10, 7.09 & 7.15. Well done both. 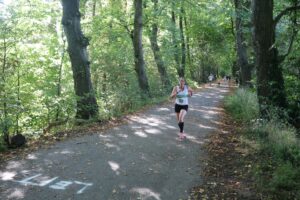 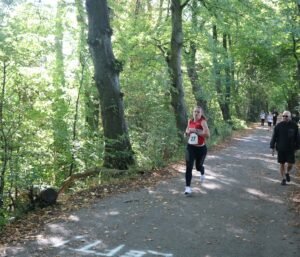 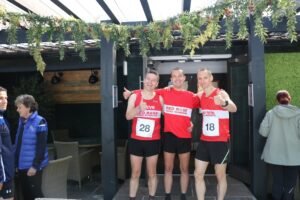 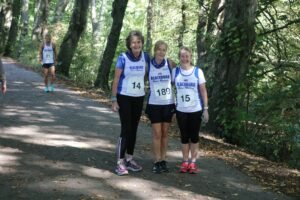 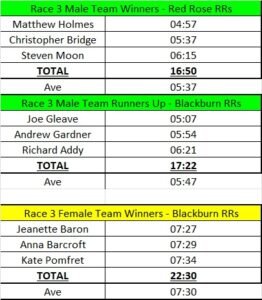 After his improved performances, constant smile and all round being a nice guy – Cesare Giombetti (Darwen Dashers) earned his series spot prize win. With a target time of 7.20, Cesare ran 7.20, 7.11 & 7.10 – really gritting his teeth in the final race to get that PB – well done Cesare! 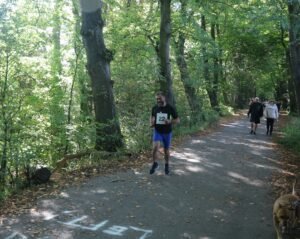 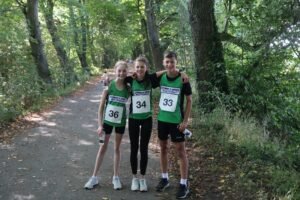 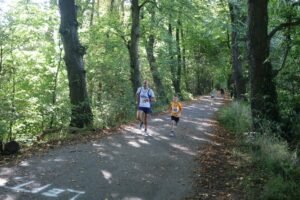 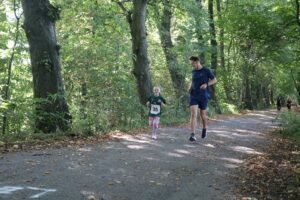 Inspiring ‘older kids’ included Jacquie who’d had a nasty bike accident just a few days earlier, and Ellen who ran with a broken arm in a sling! Tiffany & Nicola summed up the overall upbeat feeling, finishing smiles ahead (sorry…) of Race Director Dan… 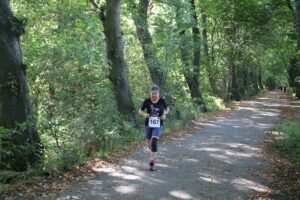 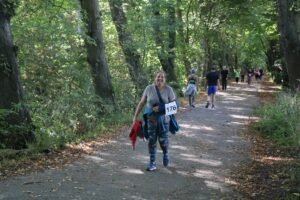 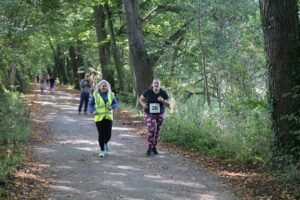 Full Results (for all three races)

The full set of results are shown below for the three-part series that took place in July, August and September.

When will the OTM series be back? We’ll go again next year, most likely over 6-months (April to September) on the first Saturday of each month. We realise some people may not be able to make all six dates, so to qualify for series prizes you’ll need to run at least four out of the six races.

Oh…..and if you’re up for a real challenge (in typical TRB fashion…) – they’ll be two races each month, the usual downhill…then an uphill mile! DON’T WORRY – it’s not straight back up the OTM, it’s a slightly kinder very closeby route (taking you back towards Race HQ, The Hunters Pub). 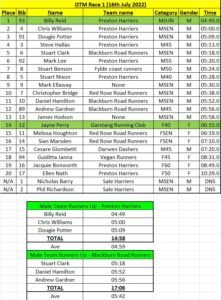 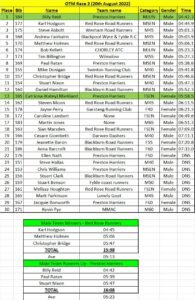