Junior parkrun in Rouken Glen left us with a slightly later start time than the previous events. It still didn’t give some folk enough time to get to the start line on time! A few folk lost through the glen, marshals contacting race control to say runners were on their way led to a slightly delayed start. Much to the chagrin of some of the waiting runners, assembled at the start line.

Fully assembled and briefed, they were set off up the hill. A 500m dash up a rough park road to reach the mud and mayhem in the meadow. A well-marked course through the grass (thanks Westerlands CCC), brought runners down to the glen. Steps both down and up were on the agenda for the participants, accompanied by ample marshal encouragement. 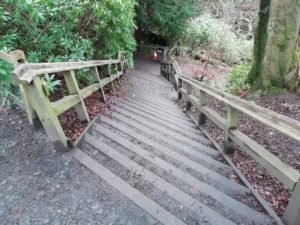 Back out into the park proper and a long slow incline round the field and towards the waterfall. No time to stop to admire the splashing waters, before heading in to the second lap.

That start hill, was to provide a boon for tired legs, with a now speedy descent back to the waiting timing team.

Kieran Cooper, (University of St Andrews), once again smashed through the line. Powering through in an amazing 18.05. Series runners, whilst in awe of Cooper’s talent, are glad he’s soon to head back to university!

The family were denied a chance at a repeat of the Linn Park 1-2, with Cooper Snr – Richard – out suffering injury. Although given the pace that second place man Crispin Walsh (Giffnock North AC) crossed the line in, with a time of 19.20, that double may always have been in question. Walsh’s consistency leaves him in a good position overall in the series. Enjoying himself, Walsh stated, ‘Only halfway through the series and already feeling like an annual fixture’.

The battle for third was a wee epic! The race director’s comment at Mark King (Cambuslang) of “Stop being a fanny”, were enough to spur King on. Pushing on from 7th at the time of the comment, to power past Gavin Hinde (Garscube Harriers) down the final hill. Fearing Hinde would make a comeback, King crossed the line at “full boonah” in 20.46, with Hinde in an almost teary finish in 20.53. Clearly, he had given his all! 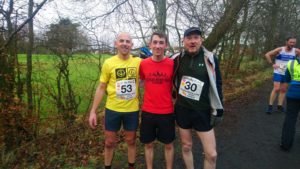 With Kx5 and Lx5 winner, Laura Wallace (Ayr Seaforth) AWOL for the third event, Jenny Brown stole her limelight taking the tape in 23.06, throwing the women’s series battle wide open. Podium regular Kirsty McLeish took 2nd place in 24.43, despite getting lost finding the start line and running half the course in reverse getting there! Completing the podium and racing McLeish down the final hill was Sheila Murray in 24.54. 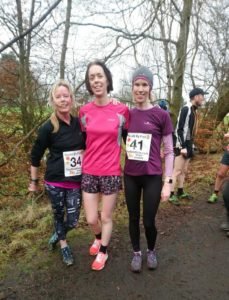 In for a treat

Runners were replenished after crossing the line with some caramel wafers courtesy of Tunnocks, and banana loaf baked by Michelle (recipe)
Volunteer Melissa got into the Sx5 treat ethos, instructing runners to “go straight through the mud” at the foot of meadow. 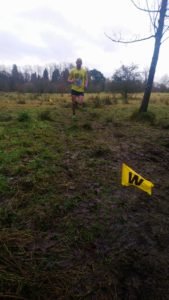