I’m an ultra runner. I can safely say that now, I’ve done a few and I enjoy them. “You must be a really serious runner” folk comment. Well they obviously know nothing of Jedburgh Three Peaks Ultra – possibly the least serious race on the Scottish (maybe UK) calendar. With a brand new tag line of “The race that never grows up…”, and guidelines such as “ultra rule #1: don’t be a dick”

An ultra of 38 miles, so considered to be ‘short’, this is an event that actively and outwardly supports the LGBT scene both within and without running. The first race in Scotland (again possibly the UK) to have three entry genders – female, male and non- binary. Embracing that culture, this is like Ultra PRIDE – rainbows, unicorns, fancy dress (compulsory for relay teams and encouraged for full ultra runners) and a YMCA disco volume warm-up at the start line! All very serious stuff! And that’s before we get to the 6ft squirrel!

With strict rules about where earphones could be used on the route (if you’re running on tarmac don’t use them!), I set off slowly chatting to a my housemate Emma, who was also running. Living, commuting and working together meant the chat was never going to last 38 miles! The tarmac petered out. The trails started and the music went on, and I was off to run my fastest km of the day! After that initial exuberance I settled down into a more relaxed pace, and gradually worked my way through the pack, speaking to folk I know as I worked forwards. Its always good to see so many familiar faces and catch up while running. Ultra running really lends itself to this more than any other distance I think.

Relay runners were clearly marked with race numbers also on their back – just in case the fancy dress didn’t highlight them enough! Approaching 1007 walking a small incline, it was time to chat to another runner and another good friend, Garry, running in my team from last year – Completely Norfolk and Chance (I take compliment in the word ‘Completely’ was added to the team name after I left to run solo ultras – I find compliments in the most unusual of places!) was struggling. He is still recovering from a freak injury involving Compeed plasters!

A quick bollocking and he was trotting behind me. A few stern words, some gentle encouragement, a gel I picked up off the ground somewhere and a suppressed laugh when he fell in the dirt and we were heading down into CP1, passing excellent photographer Sandra Hunter on arrival, I commented, ‘Get a good one of Garry, he’s fucked!”, aren’t friends just the best!

I’m not sure at what stage it started to go wrong for me. But it was somewhere along this section I noticed it. My head just wasn’t in it. I think it was the thought of coming back this way and over leg one in reverse for the return journey – I really don’t like out and back, or laps (hats off to anyone who can do Glenmore24 and the like!). And the on/off music wasn’t helping me either. Friends at CP3 asked how I was, my answer being a very nonchalant shrug of the shoulders. I didn’t know how I was, but at least the best bit was ahead. The Eildons…..

A quick stop for kit check – it was promised, and this seemed the most likely spot for it, before the most exposed section of the route. With such a simplistic kit list its hard to understand why anyone could fail (no idea if any did, but I saw people fail Fling kit check and that was even simpler!) – and now time for the hills. Pre-race photos had depicted a fair bit of mud here, and with quite an amount of runners having already made the journey it was never going to improve.

It’s a tough climb up Hill 1, but on the plus side the views were fantastic. Collecting a bit of race litter on the way up. I stuck it in my race belt to apportion blame later. This would be easy – a relay runner had dropped their timing wristband!

As soon as the summit was reached the wind tried to return me back from whence I’d came! It’d blow your hair off, if I had any! One Shite Runner lost his wig – that’s his excuse for being bald!

A good descent surfing the rough stones, a quick thanks to the MR guys parked up in the landrover and another climb into the wind on Hill 2 (sure they have names..) and on to Hill 3. This was going too quick. The best part of the route was done before I’d got chance to really enjoy it. Down through the woods and my head is way out the game, and I’m not enjoying my running at all , and with another race highlight to come – the play park, and some (importantly) veggie jelly sweets, hopefully a booster.

Heading into the park I saw the two runners in front get set upon by a bat and a something else! I tried to use their confusion to skip past on the climbing frame but got distracted by a friendly hug from a zebra/cow/unicorn! I told you this was a serious event yeah?

An epic race up the climbing frame and down the slide for more photos and hugs. I love these marshals. I somehow didn’t see the famous Silkie the Unicorn. Must have been my weariness!

Some heavenly nectar (flat coke) a few squidgy Percy Pigs, and a telling off from Neil MacNicol for spending too long in the CP and I’m off. More tarmac, more tunelessness, and I sail down the road eager to be back on the trails.

My memories of this section are intertwined with the previous year when I relayed this leg. So they seem full of joy and happiness, but i know this is not how I was feeling whilst running it this year, so the lines are blurring. As the finish approached, I remembered this year, I wasn’t stopping at Maxton, but had another 10 miles to go. With encouraging words (and I’m told afterwards some concerns) from Team 1007 at the CP going round my mind, ‘Anything you want?’ I asked to stop! And is about as close as I’ve ever been to a DNF. At that very moment, if there’d been agreement from them I’d’ve stopped. I was told to get a move on, and a beer would be at the finish. My friends know how to motivate me!

With these words in my mind I left the CP and headed up the road. More tarmac. It felt as if this had turned into a road race somewhere! It’s all uphill too. I don’t remember it being so downhill on the way into that CP a couple days ago (was that only 5 hours ago?). I accepted the hills as somewhere I could walk, and plodded onward at a run/walk/shuffle pace. Reaching the wee muddy alley, the trudge to the top and my feet are clagged in mud and feeling three times heavier. A stamp or two, a kick of the fence post only proved to highlight the pain in my muscles, and didn’t dislodge any mud! The trail would have to work it off.

A clamber over a stile gave me a seating opportunity – any excuse seemed good now. Phone out, new playlist needed. Something to get me moving created by my friend Andy in London. Some brutal heavy stuff (very apt to how my legs felt) tracks such as Condemned To Agony (by Cannibal Corpse), Be Dead or Die (Starkill), The Inevitable Degradation Of The Flesh (Nile) and Hours Passed In Exile (Dark Tranquillity) all seeming very relevant. A quick text ‘demanding’ my hoody and chocolate milk at the finish line (ever the diva!) and I forced myself to start moving again.

A windy crossing on the bouncy bridge with a petrified relay runner, and another hug of encouragement from reverse sweeper Fiona – the volunteers are amazing! More words of support from a friend in a passing relay team, and only half a mile to the road crossing and sugar! It’s a long half mile….

The end is nigh

A quick rest climbing over the crash barrier, sweets, coke, and I’m moving. Not far to go, but more tarmac. The tunes are off and I’m struggling. Alot of people don’t understand those of us that run with music. But we’re all different, each and every runner has some sort of personal preference for how they run, where they run, how far, with who, what kit etc. Music is a big thing for me (in case you haven’t noticed!). It distracts me when things aren’t going well, encourages me to push harder when things are going well. Helps me remember things. A single tune can invoke so many memories.

The last few miles were a real struggle. I made it. A high five from a six foot squirrel to finish off the surreal-ness of the race. I don’t actually remember crossing the line or getting my medal – both things obviously happened! As promised I was taken to somewhere warm for a well earned beer!

Thanks to the organisers, volunteers and random supporters along the way. And huge thanks to my friends without whose encouragement I’d never have made the finish. 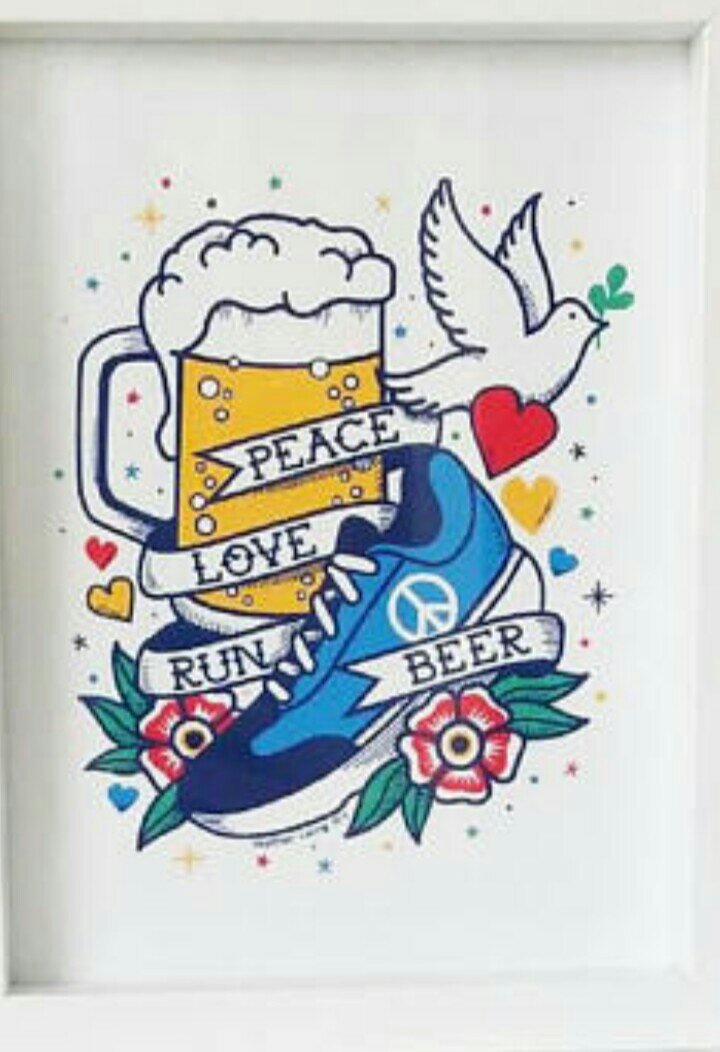