And so it came. Has it really been 10 weeks since we started this series? We’ve reached the finale – Qx5 – Queens Park. In some ways, it doesn’t seem that long since the first race in Kings Park. Then you cast your mind back and realise it was in November, and that sounds ages ago!

Like Kings Park, the course at Queen’s Park would be mostly mud-free. The cat is well out of the bag now, and everyone knows that South By Five is not just a series of parkrun-esque routes. Glasgow’s southside parks have mud, hills and steps a plenty. And South By Five has visited lots of them.

South By Five was inspired by South Side Six. So for the final event it seemed right to tip our hat in that direction.

Same runners in their SS6 tshirts, same start line, same starter! Nick Vaughan joint race director of SS6 stood strong in the wind, and gave a count down followed by a blast on the airhorn. Then another blast. And then another longer blast. He was getting the hang of that horn by the time the back runners crossed the timing mat and headed down the hill towards Battlefield Road. 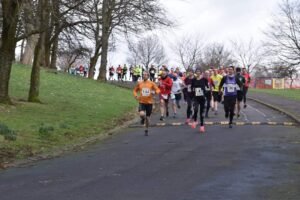 Unlike SS6, runners today wouldn’t be leaving the park. As the front runners careered at pace down the hill, one of the hi-viz heroes stood his ground and angled the runners round a tight bend that would lead them back up the hill toward the flag pole. Already the runners were cursing the race director – not for the first time this series!

A short wooded section with not enough mud led the runners to the step downhill by the glasshouse. Some mis-communication by the race director left some runners confused when they were pointed straight on. Not perturbed for too long, the front three pulled out a good lead on the chasing pack. By the time they reached the Victoria Road gate, the pack were reminiscent of a cycling peloton. Huddled together drafting in to shelter from the ever present wind bowing around Queens Park.

With a rattle of cowbells the runners swept on by, through the MIgo Mile start/finish. The slight uphill finish for that event became the start of a long drag of uphill. Past the pitch and putt, then back towards the flagpole as they began a second lap.

Now as we started with a SS6 start, it was only fitting we finish that way as well! On reaching the Victoria Road gates, runners were angled up the tree lined avenue towards the steps. Steps that led to another hill, a right turn that led to another hill. And the hard earned finish line. A few swear words were uttered at that finish line! And a few sighs of relief. It was over. Ten weeks, six races, 30km. 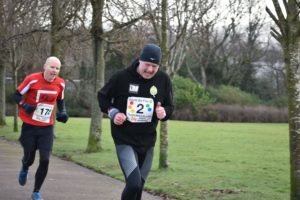 In contrast to the cold wind, hot soup, bread and cake awaited the runners back down the hill at Queens Park Bowling Club. Results and awards awaited the sucessful – and the lucky, the muddy, the happy and the broken! Goody bags and hand made medals were handed out to series finishers – runners who had complete at least five races. 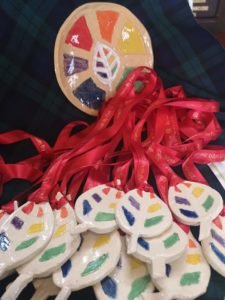 Cris Walsh, (Giffnock North) once again took the tape at Qx5. Crossing the line hand in hand with his daughter comfortably taking the Series title. A small blip at Bx5, the only blemish in a outstanding set of results 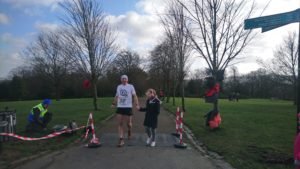 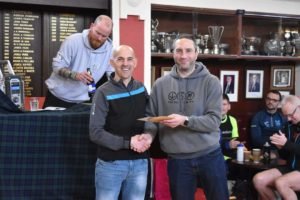 Mark King, Cambuslang Harriers mnaged to hold off Keir Crawford with a blast up the final steps to take 2nd place in the race and the Series.

Another consistent perfomance from John Murray, Garscube Harriers 4th in Qx5, and 1st V40 for the series.

Jamie McLaughlin, got better as the series went on and took the V50 prize. Alan Duff enjoyed the Series from start to finish and even more so when he took the V60 category prize.

The ladies overall placings were tied up prior to the final race. Jenny Brown, again took the win at Qx5, leaving a good trail of guys in her wake, as she has throughout the Series. An excellent and consistent performance throughout the series. 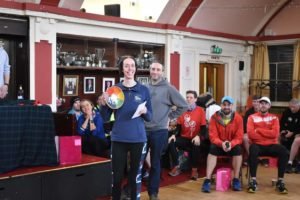 Kirsty McLeish missed the last race, but like Hinde in the men’s series had done enough in the first five races to secure 2nd overall. Closely pursued by Sheila Murray, who finished 2nd in Qx5 and just behind McLeish in the overall standings. 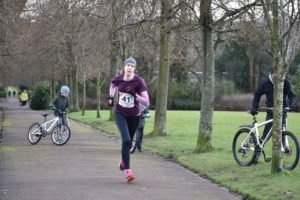 Third place female for Qx5 was Laura Grant, taking part in her first Sx5 event. She’ll be back for more next year!

The age category prizes for the ladies were Ruth Harrison taking a comforable win in the F40 category, and Jane Hodgson’s steady consistency throughout the series enough to secure her the F50 prize.

We consulted our runners, and our marshals to give out some special prizes. It’s always good to be recognised by our peers… 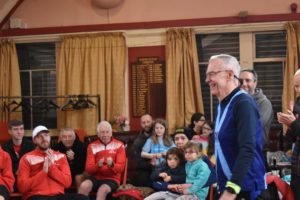 The runners voted for their Marshal of the Series – a tie, Jacqueline and Gillian Glass

The runners voted for the Runners of the Series – the Runner’s Runner was Anna Robinson.

Huge thanks to the marshals throughout the series. Whilst all were amazing we had two extra special guys – Brian Hughes and Rodger McEleney. Top of the range gentlemen! 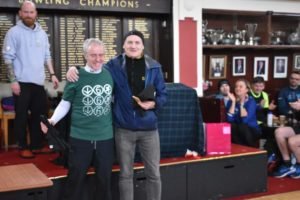 On hand at the finish line throughout the series we’ve had ProTay Timing and Events, and Debbie from AmVale prvoding first aid cover at all six events.

Queens Park Bowling Club supplied an amazing venue for the presentation, and allowed Anika Ainslie Aromatherpy and Massage to ease a few aches and pains! A free drink at the bar from TRB’s Dan (the Beardless Man). Massive thanks.

As part of the Series, we managed to raise some good money for good causes along the way. Friends of Kings Park, and Friends of Linn Park were amazing support to the events we held in their parks. Give A Dog A Bone and Canine Campus were also recipients of donations made by the runners on sign up. 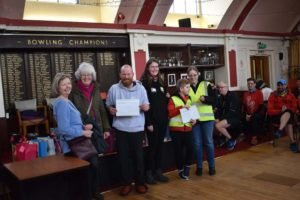 Check out our other races and we hope to see you again. Thanks for coming to Queens Park