My trials and tribulations of running – we’ve all had them!

We’ve all experienced the trials and tribulations associated with running over the years, most of us ‘learning the hard way’ – regardless of the advice other runners give us based on their own experiences. My running exploits began all the way back in high school – doing a quite bit of track (1500m) and cross-country. After that I completely lost ‘the running bug’ for two decades up until 2012 – which is a shame as I was pretty quick back then!

In 2012 I started running again to raise funds for Macmillan Cancer Support. ‘100 Miles for Macmillan’ ended up raising £1,113. It was tough going and looking back I didn’t really train properly (lots of ‘junk miles’) but it was great fun, I got fitter and felt like I’d achieved something that friends and family (including those affected by cancer) would be proud of.

2013 – My first (of many) tangles with Istanbul marathon

The following year (2013) I entered the Istanbul Marathon with a friend of mine (thanks Mark Wheatley!). We hobbled and cursed our way to the finish line in about 5 hours 13 mins. It wasn’t a pleasant experience.  Mark hasn’t gone anywhere near a marathon since and unfortunately experienced lots of injuries.  I had unfinished business….

2014 was another fundraiser year, this time for Macmillan Cancer & Pendleside Hospice, 123 miles over 10 races whilst raising £622.  Again very little ‘proper’ training in between, but the regular races helped keep me fit. 2014 was the year I’d started to progress, reducing my Personal Best times across all distances. I just needed to start training properly!

2015 – A sub-4 hour marathon, followed by disaster at Istanbul Marathon

2015 was a year of gradually training better, eating better and learning more – achieving my first sub-4 hour marathon by the skin of my teeth at Amsterdam in 03:58:00 – I was progressing! I could run a marathon!

Just four weeks later, Istanbul marathon brought me back down to earth – it remains my only ever DNF (Did Not Finish) – pulling out at half way with my left knee in agony.  I dragged my sorry ass back to the finish line and clapped those brave/fit enough to complete the marathon – I’ll never forget the way I felt watching all the runners finish with me having quit. That DNF remains my motivation to push forward towards completing the World Major Marathons.

2016 was a good year, being part of the mixed sex relay team winners (‘Norfolk and Chance’) in April at the Highland Fling! 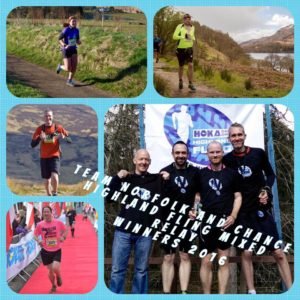 I followed that up by completing my first proper marathon training plan (thanks MapMyRun!) and smashed the Istanbul marathon in 3hrs 38mins. It was my fourth consecutive marathon in Istanbul, with the memories of the previous years’ disaster still being fresh in my mind – it felt amazing to conquer my running ‘demons’ – I drank Istanbul dry of Efes and scotch whisky that evening… 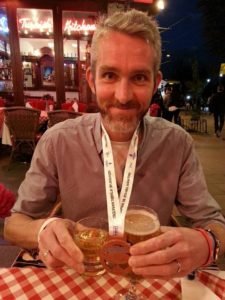 After that I took a few weeks off, registered for Paris Marathon 2017 and began a solid winter training stint.  I love winter training – lots of dark, cold and wet running sessions – but so peaceful and relaxing – I can’t wait for this years winters training.

Next? More on 2017, running eight marathons in eight months, the world major marathons and much much more…