A cold and misty start to the inaugural Trossachs Trail Marathon (Strava). Billed as a “boutique event” by the race director, just ten runners toed the line.
A tough and undulating route beckoned, and after a short race brief in the cold winter air runners where underway.
Quickly up the hill and onto the forestry trails, distinct sub groups quickly formed in the pack. Rich Cross and Paul Young (Lothian Running Club) setting the early pace. Phil Knight (Glasgow South Road Runners) tracking close behind keeping the front two just in sight. At the third road crossing at the top of Loch Arklet, Knight exclaimed, “I’m really enjoying this bit, the views are fantastic.”
Andrew Fullwood (Westerlands CCC) and Nick Dowley (GSRR) would run most of the race together, until being caught by the chasing Lou Ella Cole (Perth Road Runners) and Zuzanna Rencova (GSRR) encouraged Dowley to up his pace!

Just after the half way point runners were rewarded for their efforts with a hill! One of those hills when the path requires to zig-zag to reach the top.

Race director, Alex Osborne, had warned runners in the race brief, they would be walking this part! Race leader, Rich Cross, commented, ‘That hill was a good opportunity to have a little walk and enjoy the views.’
The views were not the only reward for this tough climb. A long sweeping 6km downhill into Comer awaited. Osborne, on supply duties to CP4, narrowly managed to stay ahead of Cross, to make the CP before the race leader! Seven minutes separated the top 3 at this stage, with Cross now 4 minutes in front of Young in second place. Race on!

Leading female duo, Cole and Rencova were cresting the Hill at this stage, and admiring the stunning views behind, towards Arrochar and the Cobbler.
Cross turned up the gas, and with Young now suffering Knight became his nearest challenger. Knight’s speedy finish, including a wardrobe change, proved to little avail in snatching first place from Cross who passed the line in an awesome 4.12.30. Too fast to be met by his wife, who had yet to arrive! Knight was second in 4.25.17, with Young crossing the line in 4.32.23.

With Cole and Rencova proving faster on the downhill they were to catch Fullwood and Dowley. Dowley said he was “enjoying the social pace with Andrew [Fullwood], until the girls forced the pace to increase”.
Dowley proved to be too strong for the girls, crossing the line in 5:50:38. Cole followed close behind in 5:50:58 to take the first female spot. Rencova left running pal Fullwood eating dust to sprint over the line in 5:53:17.

Fullwood narrowly missed on a sub-6 finish with a diversion. Close to the finish line into the children’s play park to test out the apparatus – “That slide was damn cold” he gasped, taking the tape in 6:01:28

Plenty of mud, grit and determination was the story of the tail pack. Melissa Williams (GSRR) recovering from a leg injury 12 weeks earlier completed her first marathon thereby qualifying for the Fling ultra in April. Joined by partners in crime, and encouraging pals, Donna Gillon (GSRR) and Anne Williamson (Bellahouston Harriers). Crossing the line hand in hand in 7:13:50. Williamson’s GPS recording the longest distance of the day at 27.5 miles. Probably accredited to the depth of mud she was prone to sink into being registered on the device! 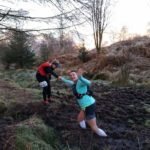 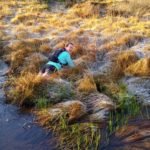 Well done all the runners. Special thanks to marshals, Michelle Sinsheimer, Saki Nakamura, Sharon Taylor and Jamie Provan who braved some extremely cold temperatures to keep runners on track. 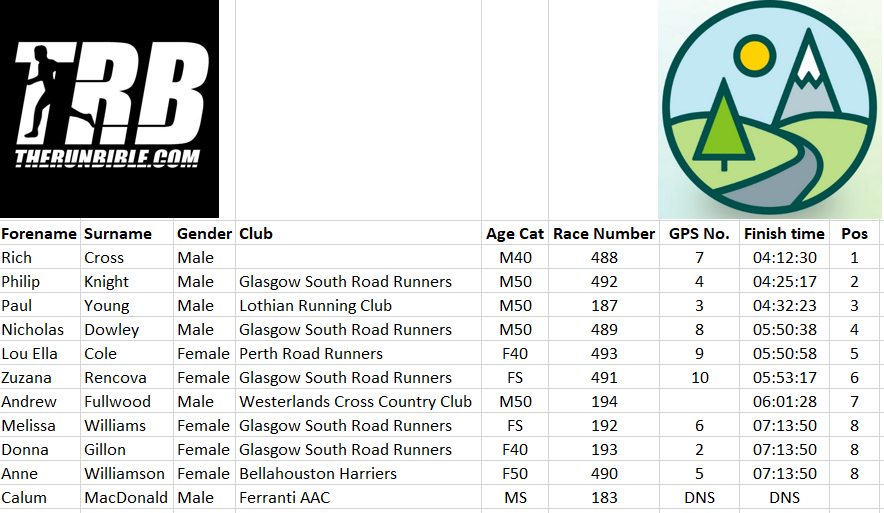 After a successful pilot event, we hope to see you all back for next year’s race. Keep an eye on Our Events page for further details. We hope the weather is the same!