With the race calendar tumbling, and on the back of the success we had with the Virtual Migo Mile for May we decided it would be a shame for the Dick Wedlock Race to miss a year – it’s been a consecutive feature of the race calendar for 32 years!

In place of the Dick Wedlock Fire Five Race – a planned 5-miler in Queens Park, with a post-event BBQ and ceilidh we opted for a 5k simple course to be run in solo efforts over a 10 day window.

In the end the route was slightly shy of 5k. The initial drawn plot was 5k, but on running the GPS clocked a stingy 4.85. Both the start point and finish line were good distinct marks, so we decided the course would stand as was. It’s a virtual event, everyone is running the same course. With social distancing required to avoid other park users, it was likely many participants would end up doing 5k anyway!

An event more about the inclusion of runners and the celebration of who Dick Wedlock was, we opted to split the prize pot across all participants, with everyone who clocked a time receiving a £10 voucher to spend at Migo Sports. This was a win-win for all – local runners able to support local business.  Despite the limited prize on offer, and in spite of the heat, some amazing times were laid down on what can only be (under) described as a tough course.

A slight tweak of the Strava segment – the first version seemed a bit rough, and missed out quite a few runners – robbed eventual overall leader Scott Henderson (Westerlands XC/GSRR) of a sub-18 minute time. The adjustment saw his time tick from 17.59 to 18.01! Sorry Scott!

Melissa Williams seemed to be the biggest loser of the segment adjustment! Being one of the first to set a time, she rightly took the preliminary crown, and was also rightly proud of this, although knowing it wouldn’t last, “can’t wait to watch this get swept away from me”, she exclaimed. However, one of a couple of runners who’s activity was not picked up on the updated segment! Don’t worry Melissa we’ve included you on the results – and added a little spot prize for you – well done!

Everyone still wants to know the times…

Adding to her recent Virtual Migo Mile success, Kristina Greig’s (Bellahouston Harriers) 20.07 squeezed Jenny Brown into 2nd place with her 20.16. Jenny also suffering GPS issues – (we’re very sure she didn’t take the shortcut her Strava suggests!) was spurred on by the “extra motivation to try and stay ahead of my sister”! Sister, Sheila Murray clocked in third place in 21.06. 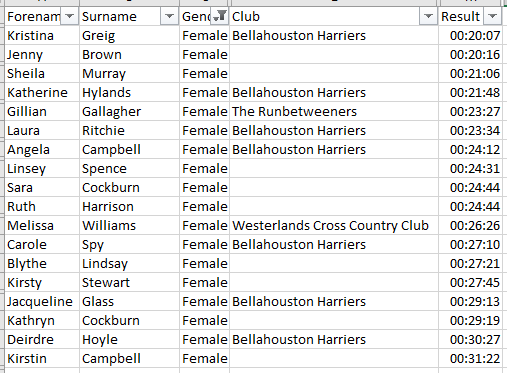 Scott’s blistering run in blistering early afternoon heat, pipped fellow Glasgow South Road Runner, Mark King in to 2nd place. Pretty sure Mark had plenty in the bag though; if we had pushed a more competitive nature to the virtual event – his first kilometre a good 30+ seconds slower. We can’t wait for some ‘real’ events to resume to see some good toe-to-toe racing. With race director, Alex (Westerlands/GSRR) excluding himself from the standings, Scott Macleod (Vegetarian Cycling & AC/GSRR) sneaked a 3rd place in 20.35. 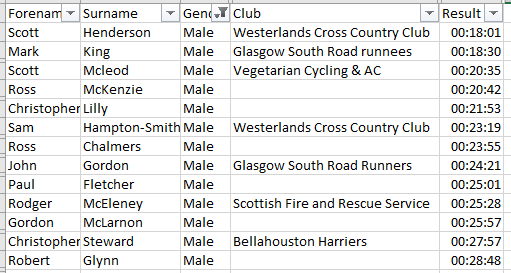 A special shout out to former race director. Rodger McEleney, has now competed in the Dick Wedlock Race for 32 consecutive years! It is great to have such experience on board as part of the core event team for the 2021 event.

The event raised in excess of £100 for the Scottish Fire & Rescue Family Support Trust. In addition monies were also raised from the cancelled Dick Wedlock Fire Five Race due to be held in May

Many of you will have heard of the Dick Wedlock Memorial Race, some of you may even have taken part. Dick Wedlock was a firefighter until an untimely road-side accident in 1974 ended his career. A broken foot and broken neck which paralysed him from the neck down.

The RUN Bible agreed to take over the hosting of the event in 2020, and whilst the SFRSA have celebrated the life of a fellow fire fighter, TRB would like to celebrate the history of a fellow runner.

Dick Wedlock was not only an exemplary fire fighter during his career, but also one of Scotland’s most fantastic athletes taking part in the 1970 Commonwealth Games 10,000m, with best times of:

For a far more in depth insight to a remarkable athletic career, read more here – http://www.scottishdistancerunninghistory.scot/dick-wedlock/